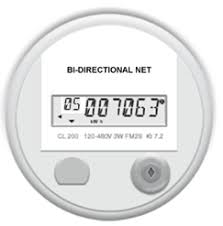 The term net metering has several definitions and interpretations. There is one most of us agree on as the standard model – the owner of a solar PV system may offset up to 100% of their electrical energy usage during the course of any one-month period at the retail rate. This is the one that solar contractors and customers like but it is also the one that utilities would like to see go away. There can be some drawbacks for the customer under this NEM.

Monthly metering fees are usually added, monthly processing fees are sometimes added, some utilities require the customer to shift to time of use (TOU) metering under NEM agreements and occasionally the utility will raise the base rate for customers with NEM agreements. The actual rate offset by the PV system is usually less than it appears when these other costs are factored in. Producing energy above the NEM point would be compensated at a lower rate called the “avoided cost rate” or “possible not allowed”.

The average size of the installed PV system offsets at least 50% of the total energy consumed and sends at least 50% of that energy into the grid during midday hours. Without a NEM agreement, the digital meter will charge the customer for the energy sent back into the grid. Even though 50% of the usage is offset at the retail rate, the other 50% will be charged to the customer and the cost of the system will never be recovered.

There are other options but they are not necessarily optimum. Ideally all energy produced by a customer’s PV system should offset load demand and should not flow out into the grid. This can be achieved in one or more ways.

The simplest way is to design the PV system small enough so that the premises consumes all the energy produced. This is easier for a business to do because most of the energy is consumed during the day when the PV system is operating. A typical residence consumes most of its energy during the morning and evening hours (non-solar hours). Because of this, the PV system size should be restricted to offset only around 20% of the total energy consumed; a NEM agreement would not be needed and the monthly fee would be avoided.

Another option is to design the PV system with energy storage. The nice part of energy storage is having some electrical power during an electrical outage. The bad part is that it adds between 50% to 100% more cost to the PV system. The system functions as stand-alone with support from the utility and does not sell any energy to the utility so the NEM agreement and monthly fee is avoided. The big drawback to this type of system operation is that it restricts PV production during midday to prevent overcharge of the batteries.

Smart energy storage systems provide key benefits to NEM. These systems require a battery type that can be left in a partial state of discharge for prolonged periods without causing internal damage to the battery. The systems meter usage and production; energy produced during midday can be temporarily stored and released during the highest TOU rate periods of the day (afternoon and evening). Some smart energy storage systems can prevent the system from selling into the grid; in that case there is no need to participate in an NEM agreement with the utility and the monthly fees can be avoided. Smart energy storage PV systems will cost 100% more than an interactive PV system without energy storage.

Net metering values need to be calculated for each customer, and the effects and benefits will be different for every one of them. There are no one-size fits-all with PV systems and NEM.