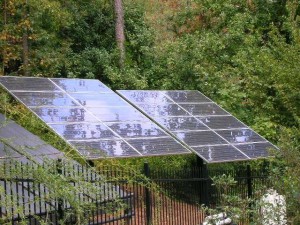 The question of optimum PV array size is the first question to be answered when designing the PV system. There are several factors that have to be considered to arrive at the best size. The customer budget, the available area for the array and the purpose of the PV array are always primary considerations. The budget is usually the most flexible since the system can be financed. The second may be difficult to get around if the location options are limited and restrictive. The third part is where most mistakes are made. There are generally two types of systems, (1) stand-alone and (2) utility grid interactive.

The stand-alone system must be designed to serve the electrical loads throughout the year. The PV array is usually sized to serve the loads in the month with the highest ratio of electrical load demand verses available solar energy. As long as the electrical load demand is known and the solar resource is known, the calculation is made for each month of the year (Avg. daily loads kWh ÷ Avg daily insolation ÷ Power conversion efficiency % = ratio) The ratio is the exact size of the PV array necessary to offset 100% of the energy consumed in that critical design month. The hard part is usually determining the kWh of electrical consumption.

The graph below show a typical PV system output capacity compared to the electrical consumption for each month of the year. The PV array is exaggerated in size to cover the worst ratio months of the year. 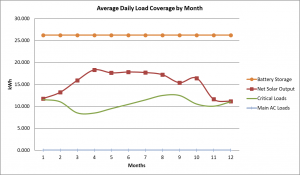 Grid interactive systems must consider how much power can be fed into the electrical system and remain compliant with the utility interconnection agreement and the best power offset value. The most common interconnection agreement is Net Metering for the billing cycle. It is typically set to offset up to 100% of consumption with solar PV generation during the monthly billing cycle. Energy generation in excess of 100% is usually compensated at avoided cost, about 1/3rd the rate of retail. The obvious objective here is to not generate more than is consumed for each month of the year. The challenge is to project generation and compare it to consumption throughout the year.

The months that usually control the PV array size are in the spring and fall. We consume less energy during these periods because of the reduced need for heating and cooling. Coincidentally, these are usually the best two periods for solar PV generation because of clear skies and lower temperatures, April and May are typically the best generation months.

The graph below shows the typical electrical usage for residential customers. The PV system that is designed to offset 60% of the annual electrical consumption is generating 100% of that consumption during the month of April.

A third type of system is a self-consumption type system that requires energy storage and is designed to connect to the grid but not sell into the grid. The PV array size usually follows the same rules as the interactive guideline above, but it can be more complicated and requires a smart control system with consumption and generation metering to keep everything in check.

It is OK to oversize a stand-alone system but with interactive systems keep an eye on the low-consumption vs. high generation months.